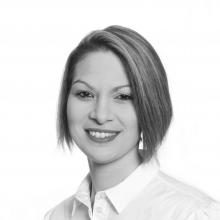 Despina originally hails from Athens, Greece and after school enrolled in the Greek Merchant Maritime Academy, continuing a long standing Greek maritime tradition and graduating as a deck officer. Starting her career as an apprentice officer on modern luxury cruise ships over 200m, she worked in the cruise and yacht industry as deck officer for nearly 10 years, continuing as a navigation officer sailing worldwide. She has had the opportunity to work in a fully electronic bridge, with new generation fire systems and tender boats and so gained extensive experience in flag state regulations, port state control, inspections and internal audits.

Despina continued her career in yachting as deck officer on private and charter mega yachts over 80m, where she reached the position of chief officer/second in command. She then decided to continue her career ashore, taking a role in the operations of the largest paper and digital chart distributor worldwide. At Ocean Independence, Despina provides solutions for every aspect of yacht management, ensuring that they are ready to perform in first class condition.