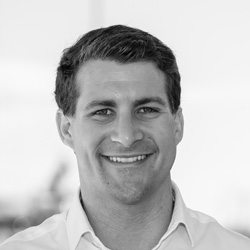 Spending time on the sea throughout his childhood, Jack had already passed his day skipper qualification at the age of 14. During summer holidays, he worked in shipyards and as a delivery skipper for a range of boats, after which he pursued yachting through a master’s degree in naval architecture. Subsequently, he was employed as a Captain and engineer in Mallorca, before joining a 65m classic motor yacht in the Caribbean, gaining valuable hands-on experience. Having always had the goal of superyacht brokerage in mind, Jack joined Ocean Independence in 2017. Operating as a yacht broker alongside the directors and senior brokers, he has been involved in a variety of intelligence, brokerage and new build projects.

Actively looking to introduce new clients and prospects, whilst supporting the new generation of progressive ideas company-wide, Jack is based in the South of France. A passionate skier, water-skier and rugby player, he is driven by high standards and aims to achieve success within the yachting industry.