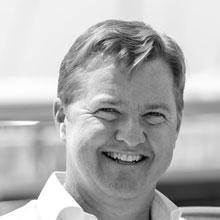 Jeremy, the son of a naval architect who was a keen and competitive sailor, sailed every summer from an early age, assisting in delivering various yachts in the Mediterranean. He worked on several motor yachts over six summer seasons and pursued his passion for skiing in the winter months. Jeremy later started working for a brokerage company in the South of France and soon got a few sales under his belt, before joining Azimut Benetti’s dealer in Hong Kong. His entrepreneurial spirit then led him to form a partnership with Clive Smith and start Seanergy in Hong Kong in the early 1990's. A successful brokerage company,Seanergy is now part of the Ocean Independence Group in Asia. Before joining Ocean Independence, Jeremy also spent a substantial part of his career at Camper and Nicholsons. During his 19 year tenure, he was involved in a number of new builds and also a broad selection of brokerage deals.

Jeremy, who is now primarily based in Ocean Independence’s French Riviera office in Golfe Juan, takes an active role in generating and growing both brokerage and new build yacht sales business. He will also be instrumental in the development of the company’s growth strategy for the Asian market.