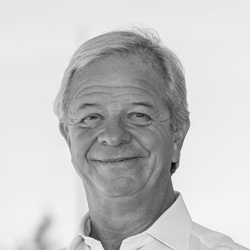 Having amassed an outstanding level of knowledge from over 40 years in the yachting industry, Nicholas has extensive experience in sale and purchase, yacht charter, management and new build supervision. His trusted expertise combined with exceptional insight have generated a global reputation for excellence.

With a love of sailing from a very early age, Nicholas was determined to make yachting his career, which went somewhat against family wishes at the time! Starting his career in the British marine industry, he progressed into the large yacht market 32 years ago and has been instrumental in the grass-roots growth of the industry since.

As a long term, valued board member of the Mediterranean Yacht Broker’s Association (MYBA), Nicholas was involved in the initial creation of the Sales and Purchase Agreement and, subsequently as chairman of the MYBA Charter Committee, he orchestrated regular updates to the Yacht Charter Agreement. Both remain current industry standard contracts.

From 2000, Nicholas led the tax & law aspect of the industry and was chairman of the committee responsible for negotiations with the French government to create the French Commercial Code for the operation of commercial vessels (successfully concluded in 2004). He remains heavily involved in tax issues today on behalf of LYBRA (the Large Yacht Brokers Association), where both Peter and Nick are founding members.

Joining forces in 2005 with a great friend and professional associate, Peter Hürzeler, they formed Ocean Independence, as joint managing partners. Following both organic and acquisitional growth, the company flourished over the next 14 years and now benefits from 15 offices and over 120 team members, representing full coverage of all aspects in the large yacht industry.

Sailing remains Nick’s hobby and lifelong passion and he enjoys spending time on the water at every opportunity.