Back to the Future

Technology might focus on looking forwards, but sometimes it pays to look back and learn from the innovations of times past.

This intricate instrument, invented in the 18th century, set navigation on a new course, shaping discovery for centuries to come.

Knowing a ship’s position and being able to guide it to a particular destination is now taken for granted, thanks to satellite navigation systems and other technology. It hasn’t always been such smooth sailing and over the years, sailors have relied on all manner of techniques to try (often unsuccessfully) to work out their position in the middle of vast oceans.

Enter the sextant in the late 18th century. The device looks complex and complicated, with its eyepieces, mirrors and moveable arm, but in fact, it simply measures the angle between two objects, usually the sun and the horizon. The magic lies in its curved frame, which measures one sixth of a circle (hence its name) and is marked off in degrees. Line everything up correctly through the mirrors, and presto – the position of the arm shows the altitude of the sun. By marking down a few readings, each with a corresponding time, the position of a boat is established and a navigational chart plotted.

The technology undoubtedly shaped discovery for centuries to come and today, historical examples of these intricate instruments are highly prized. Beyond museums and auction houses, many boats keep a sextant on board as a backup to modern electronic navigation, proving that some technology never gets old.

This icon of aviation flew faster than the speed of sound and has opened the door to modern-day time travel.

In today’s hectic world, it’s often agreed that time is the ultimate luxury, making supersonic travel incredibly appealing. When Concorde launched in the 1970's, it could cross the Atlantic in three and a half hours instead of eight, reaching speeds of 1,354 mph. The drawbacks? It could only carry 130 passengers, plus its noisy sonic ‘boom’ meant that it only flew at full speed over certain areas. Its final commercial flight in 2003 spelled a long interval in flying faster than the speed of sound.

Today, a return to supersonic flights is on the cards, with newly approved technologies leading the way. US start-up firm Boom looks to be leading the pack and has already taken 76 orders across five airlines for its new aircraft. The XB-1, a small scale version of the final product, carrying a crew of two and nicknamed the Baby Boom, is expected to fly soon, with the first full-scale passenger flights following in 2023. The aircraft will travel 2.6 times faster than any other airline, reaching speeds of 1,451 mph (Mach 2.2 compared to Concorde’s Mach 2) with a boom at least 30 times quieter.

Passenger tickets will be set by the individual airlines, but it is thought that they won’t be prohibitively high, thanks to the aircraft’s economical design. Cruising at 60,000 feet, in seats to rival first-class, passengers can expect far less turbulence than on subsonic aircraft plus views that show the darkness of space above and the curvature of the Earth below. That three and a half hour transatlantic flight might just feel too short. 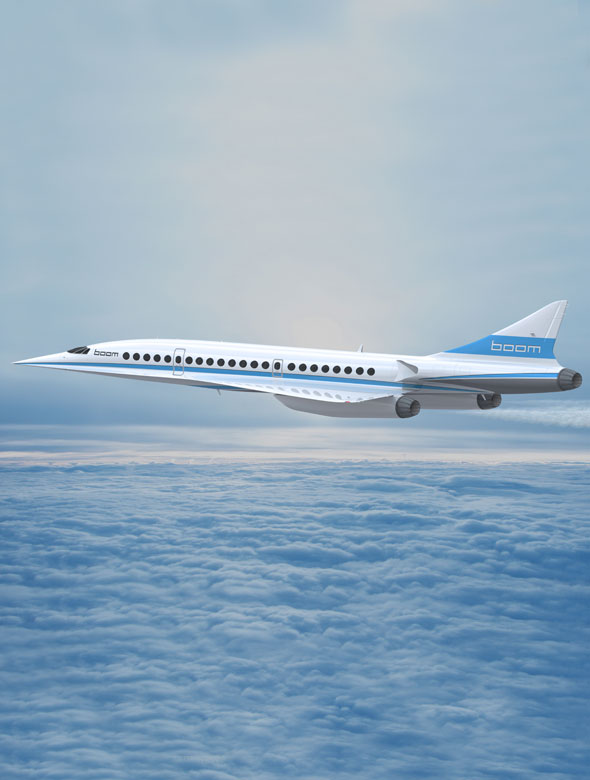