The Edge of Space

Space will soon be open for business. So says Sir Richard Branson, the founder of Virgin Galactic, the world’s first commercial spaceline.

Having sent astronauts to the edge of space twice, Virgin Galactic is preparing to launch flights to the public later this year and will change the way we see the world forever.

“Space is Virgin territory,” Sir Richard Branson told the pilots of SpaceShipTwo, VSS Unity, after they landed safely in California’s Mojave Desert on 13 December 2018 having reached space for the first time. Virgin Galactic’s sub-orbital spaceplane had reached an altitude of 51.4 miles (82.7km) — just beyond the 50-mile (80km) boundary that Nasa and the US Air Force consider the gateway to space — travelling at 2.9 times the speed of sound.

History had been made, the sceptics were silenced and Branson’s space travel company was one giant leap closer to opening space up to commercial passengers. It also put Virgin Galactic ahead of its rival Blue Origin, owned by Amazon’s co-founder Jeff Bezos, whose ground-launched New Shepard rocket also aims to provide sub-orbital passenger trips.

“After 14 years of trials and tribulations trying to get to space, we’re finally there and this really will open a whole new era of space travel,” Sir Richard told CNN after the maiden space flight. “Many of you will know how important the dream of space travel is to me personally. Ever since I watched the moon landings as a child I have looked up to the skies with wonder”, Branson said from the flight line. “We started Virgin nearly 50 years ago dreaming big and loving a challenge.”

“Today, as I stood among a truly remarkable group of people with our eyes on the stars, we saw our biggest dream and our toughest challenge to date fulfilled. It was an indescribable feeling: joy, relief, exhilaration and anticipation for what is yet to come.” 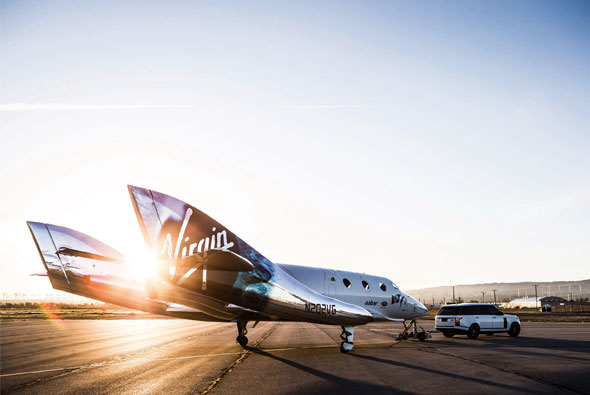 Just 10 weeks after the maiden space flight, VSS Unity reached space for a second time on 22 February, 2019 in its fifth supersonic rocket powered test flight, achieving even greater speed and altitude. This time, it carried a passenger on board – Beth Moses, Virgin Galactic’s Chief Astronaut Instructor, who was there to check the cabin design in readiness for commercial passengers. This made VSS Unity the world’s first commercial space-liner to carry passengers into space.

Chief Pilot Dave Mackay and co-pilot Michael “Sooch” Masucci became commercial astronauts and the 569th and 570th humans in space, while Moses became the 571st and the first woman to fly on board a commercial spaceship. The crew marvelled at the extraordinary views of Earth from the black skies of space and, during several minutes of weightlessness while the pilots “feathered” the spaceship in preparation for a Mach 2.7 re-entry, Moses floated free to complete a number of cabin evaluation test points. 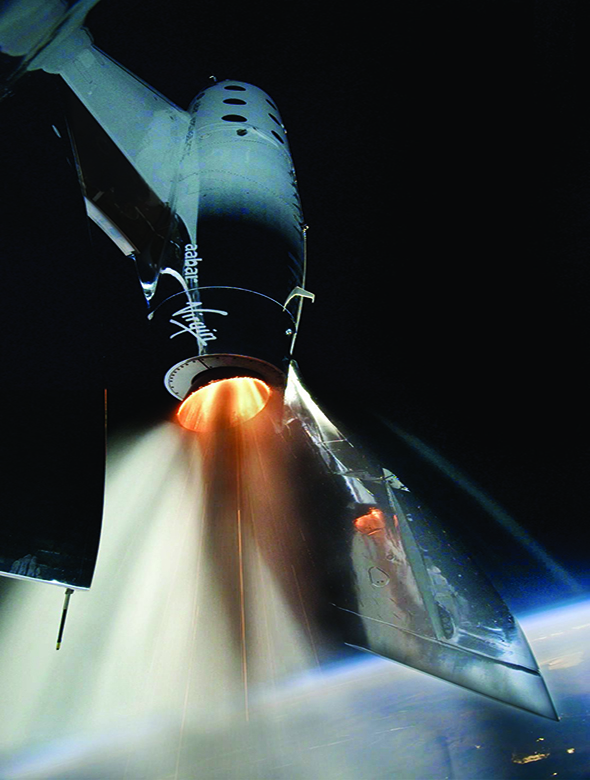 Having long dreamed of taking his business into space, Branson found the vehicle in which to do it when Burt Rutan’s SpaceShipOne made history on 21 June, 2004, by becoming the first privately created manned vehicle to reach space, after flying to an altitude of 62.5 miles (100 km). The spacecraft then won the Ansari X Prize by repeating the feat on 29 September and 4 October of that year, with Mike Melvill piloting the first of these two flights and Brian Binnie at the controls for the second.

It was as a result of Binnie’s test-flight that Branson created Virgin Galactic and placed a $100 million order for five bigger spacecraft – the SpaceShipTwo model – each capable of carrying two pilots and six passengers. Its mission is to take more passengers into space in its first few years than have been there through all of history. To date, over 600 men and women from over 50 countries have reserved places to fly on Virgin Galactic’s reusable space launch system, consisting of the specially designed mothership carrier aircraft WhiteKnightTwo and SpaceShipTwo.

So, what can passengers expect? After three days of training at New Mexico’s Spaceport America, passengers will board SpaceShipTwo which will be carried to a height of more than 40,000ft by WhiteKnightTwo, before being released. Its pilots will ignite its rocket and steer it into a vertical climb towards space. From an official space altitude, passengers will become astronauts as they leave their seats to experience weightlessness for several minutes. They will be able to view the curvature of the Earth through the cabin’s large windows and see the glowing blue line of the atmosphere. The whole experience will be captured on film for each astronaut as a unique personal record of history in the making.

Virgin Galactic’s sister company, Virgin Orbit, will provide launch opportunities for new orbital technology via its small satellite launch service. Its launch vehicle will open up the space frontier to start-ups and schools to established space companies and national space agencies. By achieving these objectives, Virgin Galactic and Virgin Orbit say they will be playing their part in opening space to change the world for good.

Branson expects the flights to open to the public later this year and he and his family have committed to being on that inaugural flight. “My wish is to go up on the 50th anniversary of the moon landing, that’s what we’re working on,” Branson told AFP at the sidelines of an event to honour Virgin Galactic at the Air and Space Museum in Washington in February.

The American Apollo 11 mission landed on the moon on 20 July, 1969. "By July we should have done enough testing," he added, but stressed the importance of safety.

After February’s test flight, Virgin Galactic is fine-tuning SpaceShipTwo for an incredible customer experience. “Having Beth fly in the cabin today, starting to ensure that our customer journey is as flawless as the spaceship itself, brings a huge sense of anticipation and excitement to all of us here who are looking forward to experiencing space for ourselves,” said Branson after the test flight. “The next few months promise to be the most thrilling yet.”