To create a legacy, there must be no limits placed on imagination. In this exclusive interview, the Head Designer of Coachbuild at Rolls-Royce reveals the highly anticipated new commission, Boat Tail.

When it comes to true luxury, few houses or brands stir the imagination quite like Rolls-Royce. For more than a century, the marque has pushed the boundaries of possibility to create superlative motor cars which epitomize both audacious ambition and astonishing achievement. Coachbuild – Rolls-Royce’s ambitious and personal statements of true luxury – takes this uncompromising characteristic of the marque’s DNA even further. Creating true one-off motor cars, designed in partnership with a commissioning patron, Coachbuild tells the story both of Rolls-Royce and the patron themselves to create a unifying legacy.

It was back in 2017 on the shores of Lake Como that Rolls-Royce unveiled their last Coachbuild motor car – Sweptail. At the time, it set a new gold standard for bespoke personalisation and was the catalyst for a conversation between a client and Alex Innes, the Head Designer of Coachbuild at Rolls-Royce. “The statement that was made to me on the shores of Lake Como was ‘show me something that has never been seen before,’” says Innes. Now, that request has been realised with Boat Tail, a truly bespoke four-seater open top, and the first of three utterly unique creations is exclusively revealed in these pages.

“We had a cohort of three exceptional individuals with a great affection for the brand who shared an ambition to create something extraordinary. Moreover, they wanted to be part of commissioning the future chapter of Rolls-Royce,” says Innes. The commissions coincided with an ambition Innes and his colleagues shared of realising a modern interpretation of the Boat Tail body style from the late 1920s and early 1930s – “the golden age of Coachbuilding,” says Innes. “The design mainly centred on the Phantom II chassis – a personal favourite of mine.” he adds. But while Innes and his team took cues from the past, the commissioning patrons agreed that this should not be an historical homage but a thoroughly modern interpretation. 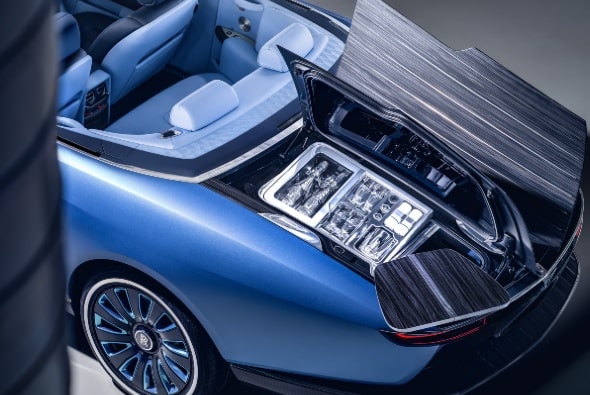 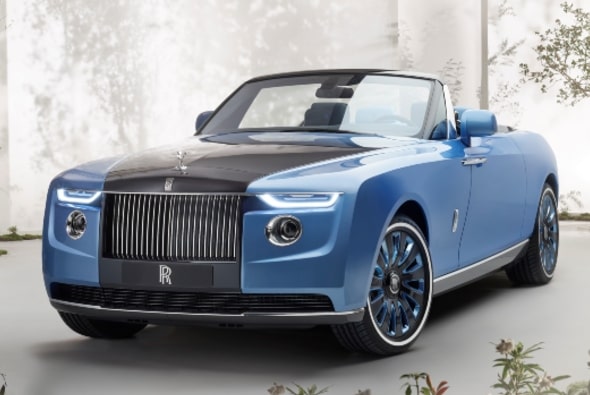 It was, in fact, the J Class yacht which Innes says was the “spiritual guidance” for the project. “The J Class yacht is, for me, one of the most achingly beautiful forms that exists in the world,” he says. “It was also the pursuit of reduction which the J Class represented that inspired us to create a certain level of simplicity with the form for Boat Tail.” The car’s body shape has an inherent sense of motion “which can only be made possible because it is a handmade car,” says Innes. “It is almost as if it were a motor launch just moving away under power and rising up out of the water.”

For the first time in Rolls-Royce’s history, the body colour of the car has been taken down onto the iconic Pantheon Grille. “This allows it to become the structure of the car, rather than an appliqué, and an integral element as to the personality of the car, while losing none of the familiar Rolls-Royce authority.” Indeed, Boat Tail is full of surprises which will delight and astonish in equal measure. The rear deck of the car mimics the sun deck of a yacht and is finished with a wooden veneer, inlaid with handpolished stainless steel pinstripes, and hides a unique proposition below.

To create a magnificent sense of occasion, the rear deck opens with a meticulously engineered butterfly motion, sliding out to an inclination of 15° “as if the car were offering its contents to you, like a waiter at a fine restaurant,” says Innes. It enables the car to ‘host’ the patron, presenting a small meal and a glass of perfectly chilled Champagne (in this particular edition, Armand de Brignac served at 6°C.) “The car itself becomes the destination,” says Innes.

The J Class yacht is, for me, one of the most achingly beautiful forms that exists in the world,

Boat Tail is provisioned with cutlery and cold food storage boxes by Cristofel. Innes and his team also developed the hallmark Rolls-Royce umbrella further by designing a unique parasol which extends over the rear deck – “a true feat of engineering,” he says. Each creation challenged Innes and his colleagues to “exceed the constraints of the rational world,” he says, only half joking. In this first creation, the client’s passion for horology was honoured with a unique timepiece, created with Swiss watch purveyor Bovet, which fits into the fascia of the car itself. The timepiece has a tourbillon mechanical movement which has never been featured in a moving car before, “with good reason!” Innes laughs.

Further obstacles included the inherent vibration and magnetism in the cockpit, “but the client was intent that we should overcome this, and there ensued a near three-and-a-half-year development process with Bovet to get this element to work.” The client also requested that he and his wife should be able to remove their timepieces from their wrists when driving the car and place them into the fascia of the car, a feature unique to this creation.

Each client was involved in the process at every stage, seeing and influencing the design as it developed from a pencil sketch to a full size clay model until their car itself was complete. “They were offered a privileged glimpse into a unique part of the marque that is usually cordoned off,” says Innes. For the commissioning patron of this first Boat Tail creation, the experience represents “the culmination of a lifetime of work,” says Innes. “This client has described it to me as being a once-in-a-lifetime moment; it is a direct marker of their success and will underline their legacy forevermore.”

In Boat Tail, Rolls-Royce redefines bespoke personalisation, masterfully telling a unique story of the past, present and future – not just for the commissioning patron, but for the marque itself.

“It’s not about what the car can do, it’s about what it represents,” says Innes. “The future of luxury is personal.”

The full edition of PURSUIT – FUTURE OPTIMISTS can be found as a digital flipbook here.