The Netherlands has such a rich history of yachting that the Dutch invented the word itself. Discover the craftsmanship in bespoke commissions at Holland’s most storied shipyards

The Netherlands has such a rich history of yachting that the Dutch invented the word itself. Discover the craftsmanship in bespoke commissions at Holland’s most storied shipyard. Founded in 1949 but with roots stretching back a further century, Feadship has fostered the talents of generations of craftsmen. Priding itself on its “uncompromising pursuit of the impossible”, Feadship’s designers, they say “have the head of an engineer and the heart of an artist.”
On average, a Feadship craftsman has 20 years of experience and has worked on 40 yachts, realising the seemingly impossible dreams of the yacht owners. “It takes an irrational, stubborn and unreasonable person... who understands that the route to impossible is the way to incredible. Someone who holds the beautiful conviction that good enough, is never ever good enough,” they say. 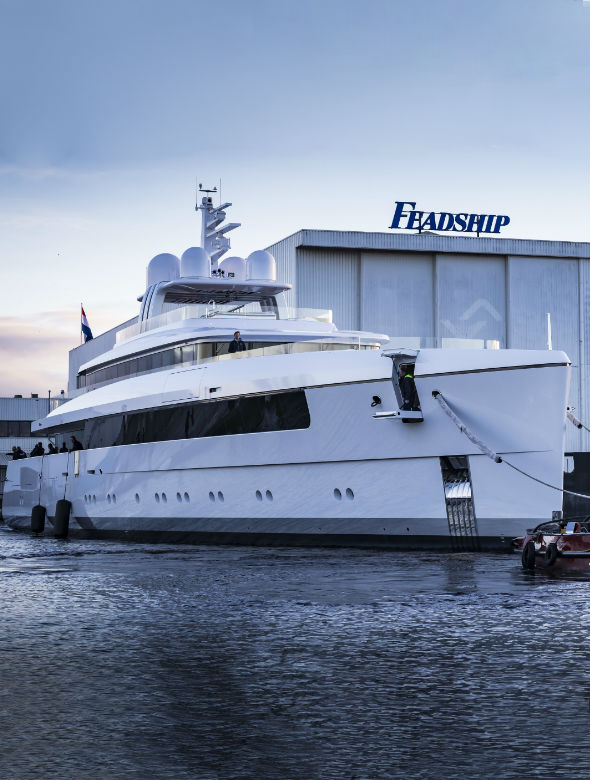 When the experienced owners of superyacht Najiba ordered her, they were realising a long-held dream of commissioning a pure custom Feadship. Starting with a blank page “and the assumption that everything is possible,” Feadship worked seamlessly for four years with the owners, Philippe Briand and Vitruvius Yachts as designers and naval architects, Claudio Cicconetti on the general arrangement and interior designer Guillaume Rolland of Studio Christian Liaigre.

The result is spectacular. With her slender lines and distinctive vertical bow, the 56m family superyacht more than lives up to her name, which means ‘noble’. The second largest Feadship to be built in aluminium to date, Najiba has proved herself exceptionally efficient with an average fuel consumption up to 25% less than any equivalent motor yacht of this size. With a top speed of 17 knots, outstripping the original goal of 16 knots, and a range of over 6000 nm, Feadship’s exceptional engineering has surpassed all expectations. “The owners and their extended family could not believe their eyes when the final result was revealed to them this morning,” revealed project manager Peter Wilson to the assembled Feadship craftsmen at her launch earlier this year. Once again, Feadship “made the impossible.”

With a century of shipbuilding experience, this family-run yard combines traditional values with the latest technology for exquisite pure custom builds. Founded by entrepreneur Albert Klzn Hakvoort in 1919 when he purchased a shipyard in Monnickendam, Hakvoort has remained in the same family’s hands ever since. Passed down from father to son, Hakvoort employs around 90 highly skilled staff, including entire families of craftsmen who have worked for the yard for generations, giving it a unique sense of community.
Crafting bespoke motor yachts and sailing yachts of up to 65m in length, Havkoort has established itself as one of the world’s leading yards whilst retaining its personal touch, making the commissioning process really special.
Earlier this year, Hakvoort delivered its 64m flagship explorer superyacht, Scout, the largest ever built by the yard following 2016’s Just J's. The experienced Owner envisioned a “vintage maritime aesthetic”, according to Havkoort, which the yard realised in collaboration with H2 Yacht Design and Diana Yacht Design.

An explorer vessel, Scout's twin Caterpillar 3512C maritime diesel engines have a range of 4,800 nm, while an ice-classed hull means that her American owners and crew can confidently take her anywhere in the world. The helicopter landing pad on the foredeck adds to her expedition capabilities.

Scout's distinctive exterior gives way to an interior aesthetic described as “Jules Verne meets Ian Fleming meets Fritz Lang” by Jonny Horsefield, Founder of H2 Yacht Design. “We were inspired by the underwater world, sea creatures, and this industrial, nautical design philosophy – with a hint of a Bond villain’s lair.”

Sleeping up to 10 guests, Scout's exquisite craftsmanship and classic maritime design theme are visible throughout. “Throughout the corridors, we have pulsing, flashing lights in the ceiling which is a nod to the pulsing lights of the power source of the submarine in 20,000 Leagues Under the Sea,” says Horsefield. Hakvoort interpreted the owners’ passion and transformed it into a reality.